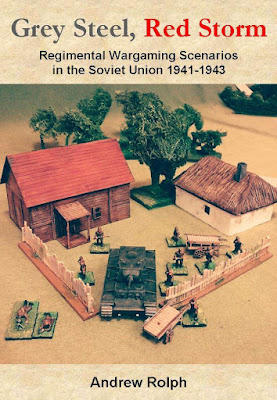 Grey Steel, Red Storm is a book of scenarios for wargamers set in the Soviet Union between June 1941 and June 1943 during World War Two.

They are adaptable to a number of sets of rules currently available in which a stand represents a platoon such as ‘Blitzkrieg Commander’, ‘Command Decision: TOB’, ‘A Fistful of Tows’, ‘Rapid Fire’ and others, including those which wargamers may have written themselves. Each player will field around a regiment or brigade of troops in each scenario.

Part One presents a brief overview of the war and some background information to the scenarios. This includes a terrain key, notes on ground scale, timescale, base sizes and some suggestions for additional optional rules.

Eleven of the scenarios have appeared in earlier, truncated form in Miniature Wargames with Battlegames or The Journal of the Society of Twentieth Century Wargamers. All have since been amended and some changed substantially (new table layouts and/or new Orders of Battle). Four scenarios are entirely new and have never appeared in print elsewhere.