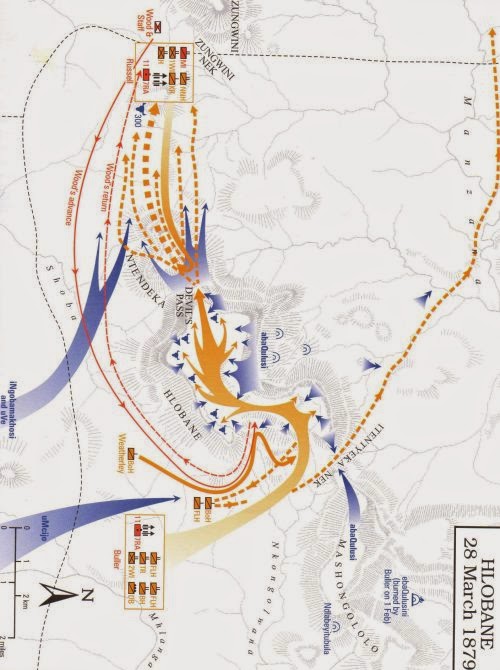 On March 28th, a reconnaissance by the whole cavalry force was made towards Hlobane. The Zulus were in possession of the mountain, which was ascended in skirmishing order as rapidly as possible, the enemy keeping up a heavy fire from caves and from behind huge rocks. The summit was reached with the loss of one officer Lieutenant Williams and serious fighting was kept up for some time in the endeavour to dislodge the Zulus from their secure positions. Captain the Hon. R. Campbell was killed, also Lieutenant von Sticenstron, and Colonel Wood himself had a very narrow escape.

Whilst engaged in this struggle a Zulu army was moving up to seize the approaches to the mountain, and cut off the force from the camp. Immediately on this being. Observed a retreat was made in rapid but good order, until a very steep and stony krantz was reached, where the men could only move in single file here the enemy got in amongst the troopers, causing utter confusion. The officers did their best to steady their men, but it became a case of scmvc gui peut.

Captain Barton’s troop was sent down the mountain to recover the body of Lieutenant Williams, and returned, having been joined by Mr. Uys. On the Hats they came up with Colonel Weatherley’s troop, and found the enemy in front and on the right and left. Retreating a short distance they were surrounded so opening out they charged through the enemy and over the neck, which was lined with Zulus. But few were enabled to win their way through this perilous pass, and of those who did many were overtaken and killed on the plain. Of Captain Barton’s troop but eight men returned to camp that night.

The broken force fought its way to the camp, followed by the enemy for several miles. Many a man’s life was saved by a comrade halting and taking him up on his own horse, a personal instance of which Captain D’Arcy gives. His horse had been killed under, him in the descent of the mountain, and he ran for his life for some 300 yards, when a man named Francis caught a horse for him, which, however, he shortly relinquished to a wounded comrade, running on himself on foot. Colonel Buller picked him up when nearly exhausted, but when he recovered his breath he dismounted; he was a second time in difficulties, and assisted by Lieutenant Blaine, and again, a third time, by Major Tremlett, Royal Artillery Indeed, most of the men got into camp with comrades mounted behind them. The loss was 12 officers and 84 non-commissioned officers and men killed, and also Colonel Wood’s staff officer, Captain the Hon. R. Campbell, Captain Barton, Coldstream Guards and Mr. Lloyd, Political Assistant. Colonel Wood’s horse was shot under him.

Mr. Piet Uys, the leader of the Burgher force, was likewise amongst those killed in action this day. Small patrols were sent out next morning to endeavour to find any men who might have escaped.