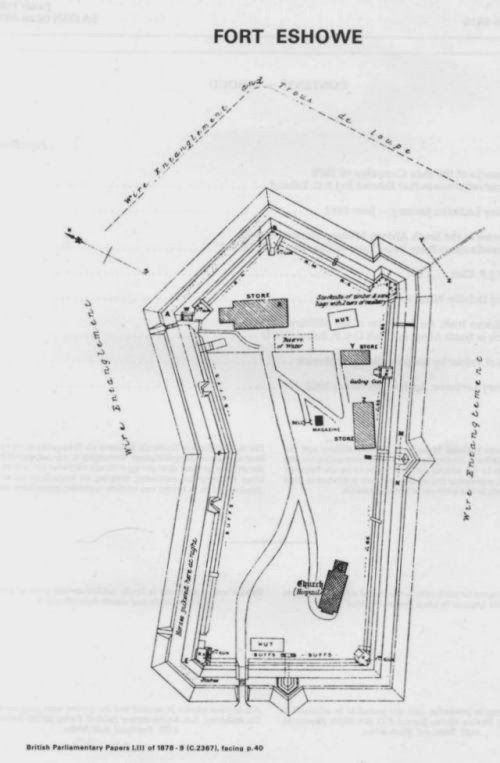 22 January 1879 3 April 1879 Eshowe was a mission station, abandoned some months before, but now selected for an entrenched post, in preference to more open and commanding ground to the north, in consequence of the necessity of utilising the buildings for the storage of supplies. The station consisted of a dwelling house, school, and workshop, with store rooms three buildings of sun dried brick, thatched there was also a small church, made of the same materials, but with a corrugated iron roof and a stream of good water ran close by the station. Here the column encamped, and preparations for clearing the ground and establishing a fortified post for a garrison of 400 men were made.

Two companies of Buffs, two companies Native Contingent, and some mounted men, were sent back to reinforce Lieutenant Colonel Ely, 99th Regiment, who, with three companies of his regiment, was on the march to Eshowe with a convoy of sixty wagons.

On the 25th, Major Coates was sent down to the Tugela with a strong escort and forty eight empty wagons, for a further supply of stores and next day a runner arrived with news that a disaster had occurred on the 22nd. On the 28th a telegram was received from Lord Chelmsford, hinting at disaster that he had been compelled to retire to the frontier that former instructions were cancelled, and Colonel Pearson was to hold Eshowe or withdraw to the Tugela, also that he must be prepared to bear the brunt of an attack from the whole Zulu army.

Colonel Pearson at once assembled his staff and commanding officers, when it was finally decided to hold the post, sending back to the Tugela the mounted troops and Native Contingent. These marched, unencumbered with baggage, and reached the Tugela in ten hours a contrast with the upward march. The various buildings were loopholed, and the church prepared for use as a hospital, all tents struck, and the entrenchments supplemented by an inner line of wagons, In the evening Colonel Elys convoy arrived safely.

The mounted men were sent back from Eshowe, because a large proportion of the horse forage consisted of mealies, which it was thought might be required for the use of the garrison, as eventually was the case. To replace the mounted men, a small vedette corps was formed under Lieutenant Rowden, 99th Regiment, and Captain Sherrington, of the Native Contingent, and did excellent service.

These vedettes were constantly under fire. One was killed at his post. Another was attacked by some dozen Zulus, who crept upon him through the long grass he lost two fingers of his right hand, had a bullet through each leg and one in his right arm; his horse was assegaied yet he managed to get back to the fort, retaining his rifle.

The vedettes being much annoyed in the early morning by the fire of some Zulus from a high hill, Captain Sherrington and six of the men went out one night and lay in wait for them, behind some rocks near the top of the hill, wounding three and putting an end to the annoyance.

Colonel Pearson felt it to be necessary to reduce the bread and grocery rations of the troops, but was enabled to increase the meat ration by a quarter of a pound, as a large number of cattle had been brought up with Colonel Elys convoy. The wagons of the troops sent back to the Tugela were officially searched, and a quantity of food, medicines, and medical comforts thus added to the stock, the two latter subsequently proving of the utmost value. All articles of luxury were eventually sold by auction, and fetched almost fabulous prices matches were sold for 4s. a box, bottles of pickles 15s. each, and tobacco 30s. a pound.

The water supply was excellent, both in quality and quantity and in the lower part of the stream bathing places for both officers and men were constructed and all sanitary arrangements most carefully attended to. A wagon laager was formed for the cattle, and every effort made to provide for the security of the fort, as we may now call it deepening ditches, strengthening parapets, erecting stockades all most energetically carried on under the direction of Captain Wynne, Royal Engineers

So things went on, till, on February 9th, Zulus were observed to be collecting but nothing occurred beyond an occasional alarm.

On the 11th two runners arrived from the Lower Tugela with a despatch from the General, almost requiring Colonel Pearson to retire with half his force to the Tugela, leaving the remainder to garrison the fort. This, after a council of war, was decided not to be practicable, the country being occupied by the Zulus in force. A flying column, however, was organised, in case it became necessary to carry out what the General seemed to desire.

Having questioned the messengers, and ascertained that they were willing to return on the following Saturday, Colonel Pearson sent a despatch, asking for further instructions, and saying he would be prepared to start on Sunday night at twelve o'clock if necessary. This message was twice repeated on different days, but no reply received.

Alterations and improvements in the defences, to enable the fort to be held by a smaller garrison, went steadily on in spite of bad weather ranges from 600 to 700 yards were marked round the fort, and trous-de-loups and wire entanglements formed on the north, south, and east faces.

On 1st March an expedition was led out by Colonel Pearson to attack a military kraal (Dabulamanzfs) six miles distant this was done and the kraal burnt, a smart skirmish being kept up with the Zulus during the homeward march.

On the 2nd it was noticed that heliograph signals were being flashed from the Lower Tugela, but no message was made out.

Next day further signalling, though vague, was taken to mean that a convoy was to be expected on the 13th instant with 1000 men, and that on its approach Colonel Pearson was to sally out and meet it. A heliograph was improvised by Captain Macgregor, Deputy Assistant Quartermaster General, by means of a small looking glass, and efforts made to flash back signals, but bad weather ensued, preventing further communication till the 10th.

A new road to Inyezane, shortening the distance by about three miles, and avoiding much of the bush, was commenced, and reported fit for use on the 13th, though the work had been hindered by very bad weather, and by the working parties being constantly under fire. Fortunately no one was hit, except Lieutenant Lewis, of The Buffs.

On 23rd March two Zulus came up with a white flag, and were brought in to the fort each with a mealie bag over his head they are said to have come with a message from the king to the effect that if our force would return to Natal he would order the officers commanding his large armies not to touch it. These men were detained as prisoners in irons, and interviewed by Lord Chelmsford on his arrival at Eshowe but of their subsequent disposal nothing appears known.

At first the health of the troops was extremely good, but before the end of February the percentage of sick had largely increased, there being 9 officers and upwards of 100 men on the sick list when it was relieved. The principal disorders were diarrhoea, dysentery, and fevers, aggravated by the want of proper medicines and medical comforts, which had been soon exhausted. The church was used as the hospital, and both officers and men lived under the wagons, over which the wagon sails were spread, propped up with tent poles thus the troops actually lived at their alarm posts.

The relief took place none too soon, there being then but six days further supply of reduced rations available for the garrison. From first to last, the men showed an excellent spirit, the highest discipline was maintained, and the reduction of the food was never grumbled at or regarded in any other light than a necessity and a privation to be borne, and which they were determined to bear cheerfully.