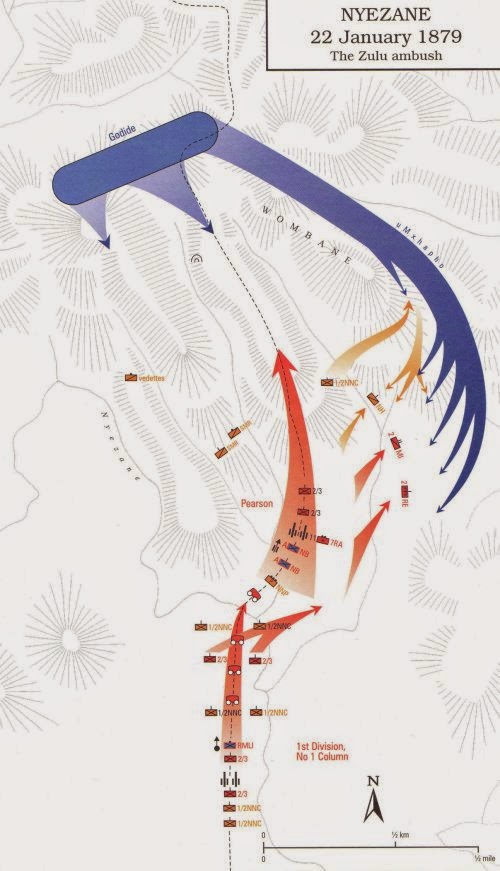 On the 22nd January 1879 the column marched at 5 A.M., crossed the Inyezane River, and halted for breakfast, and to outspan the oxen for a couple of hours, in a fairly open spot, though the country round was a good deal covered with bush. The halt here was unavoidable, as there was no water for some distance beyond, but the country had been previously carefully scouted by the mounted troops under Major Barrow.

At eight o'clock piquets were being placed, and the wagons parked, when a company of the Native Contingent who were scouting in front, under the direction of Captain Hart, staff officer attached to the regiment discovered the enemy advancing rapidly over the ridges, and making for the adjacent clumps of bush. The Zulus now opened a heavy fire upon this company, and almost immediately inflicted a loss upon it of 1 officer, 4 non-commissioned officers, and 3 men killed.

The Naval Brigade (with rockets), under Captain Campbell, the guns of the Royal Artillery, two companies of The Buffs, and the Native Pioneers were at once posted on a knoll close by the road, from when the whole of the Zulu advance was commanded. From this knoll the bush near was well searched with shell, rockets, and musketry.

The wagons continuing to close up and park, two companies of The Buffs,who moved up with them, were ordered to clear the enemy out of the bush, guided by Captain Macgregor, Deputy Assistant Quartermaster General. This they did in excellent style, driving the Zulus into the open, which again exposed them to a heavy fire from the knoll.

The engineers and mounted troops were now enabled to move up from the drift, and, supported by a half company of Buffs and a half company of the 99th, sent on by Lieutenant Colonel Welman (99th) from the rear of the column, cleared the Zulus out of the bush on the right flank, where they were seriously threatening the convoy. The Gatling gun also moved up from the rear, and came into action on the knoll. The enemy now endeavoured to outflank the left, and got possession of a kraal about 400 yards from the knoll, which assisted . their turning movement. This kraal was carried by Captain Campbell with his Naval Brigade, supported by a party of officers and non-commissioned officers of the Native Contingent under Captain Hart, who were posted on high ground on the left of the road. Colonel Parnell with a company of Buff`s,and Captain Campbell with the Naval Brigade, now attacked some heights beyond the kraal, upon which a considerable body of the enemy was still posted. This action was completely successful, and the Zulus fled in all directions. About half past nine the last shot was fired, and the column was re-formed, and resumed its march at noon.

The loss sustained in this action was 2 privates (The Buff's) killed, 2 officers, 4 non-commissioned officer, and 4 natives killed, and 1 officer and 15 men wounded. I Colonels Pearson and Parnell had their horses shot under them.

The enemy's force was estimated at 4000 the umXhapho, uDlambedlu, iNgulube,inSukamngeni, iQwa, uDududu, iNdabakawomble and amaPhela Regiments, and some 650 men of the district and their loss upwards of 300 killed. The wounded appear to have been either carried away or hidden. Four miles beyond the scene of this engagement the column bivouacked for the night; and, moving off at 5 A.M. next day, reached Eshowe at 10 A.M. the rear guard not getting in till the afternoon.