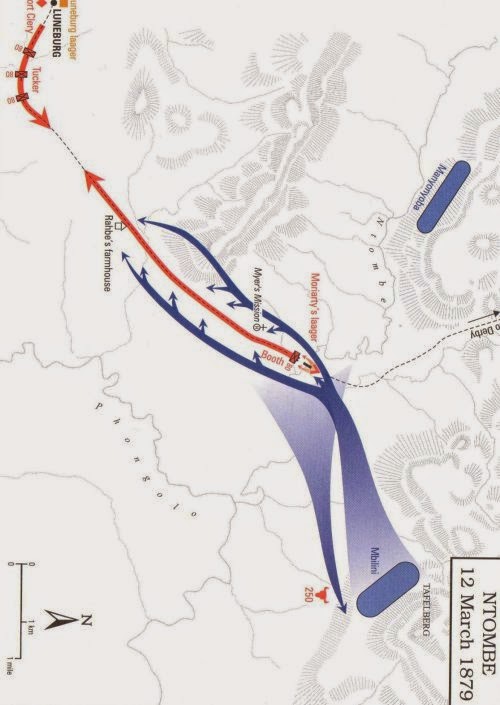 A sad disaster occurred on the Intombe River to a detachment of the 80th Regiment on the 12th March 1879. Captain Moriarty, with 104 men of the 80th, was escorting a convoy from Derby to Luneburg. On reaching the Intombe Drift (about four miles from Luneburg) the river was found to be rising, and by the time the advanced guard (thirty-five men, under Lieutenant Harward) had crossed, it was impossible to take the wagons over. They were therefore laagered on the river bank in the shape of a triangle; and there they remained next day. About 4 A.M. on the 12th March 1879 a shot was fired, and the troops turned out, remaining under arms for half an hour, when, all being quiet, they returned to their tents it transpired after wards that the outlying sentries had been surprised and killed by the enemy. Suddenly the fog lifted, and a large body of Zulus without any warning rushed on and took the laager, driving the troops into the river. The party under Lieutenant Harward, which was encamped on the opposite bank, opened a brisk fire, but were soon broken, and obliged to fly towards Luneburg; Lieutenant Harward, galloping in, gave the alarm. Only forty-four men of this detachment survived.

Major Tucker sallied out from Luneburg, when the enemy slowly retreated. The wagons were saved, and the bodies of Captain Moriarty and his unfortunate men buried.